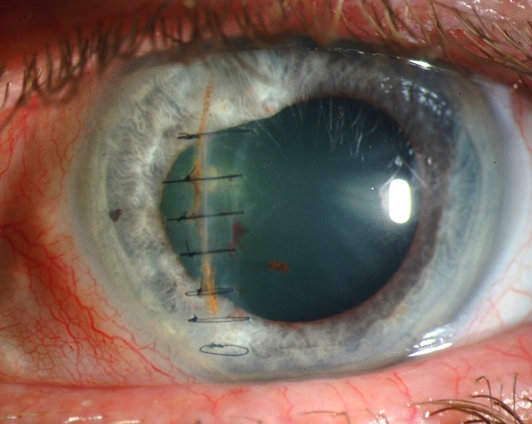 This live webinar will introduce the classification of ocular trauma, define the “Open Globe”, review the epidemiology of posterior segment trauma, and reiterate important surgical anatomy of the eye. The evaluation of the traumatized patient with an open globe and the ophthalmic surgical goals for therapy will be emphasized to include eye wall closure from the cornea to the posterior sclera. Special considerations will be addressed, including primary enucleation, post traumatic endophthalmitis, prophylactic scleral buckling, timing of vitreoretinal surgical intervention, and the management of intraocular foreign bodies (IOFB’s) of various types. A variety of surgical case examples will be offered. Finally, critical ‘take home points” will be reviewed.

DR STEVENS: This first question revolves on sympathetic ophthalmia. Are you not concerned about sympathetic ophthalmia with not considering a primary evisceration in cases of extensive open globe injury with NLP? The answer is we rarely treat unless we treat with systemic steroids or systemic antiinflammatories. So removing the eye, the potential sympathetic ophthalmia, is not the first choice of therapy at this time. If it’s obvious that there are not enough pieces or parts to work with, then you could enucleate or eviscerate. In some countries I’ve worked with, it’s quite common. There were 10 or 12 people in the hospital who had their eyes eviscerated. In my experience that’s not common. It’s just a different approach to therapy. Should we apply cryo around the posterior scleral wound after suturing? The answer is no, because it’s already going to be inflamed. So it’s not recommended to apply cryo around the posterior scleral wound. Next, what to do with recurrent bleeding perioperatively in a case of traumatic hyphema, after contusion with eye hypertension? If you have so-called 8-ball hyphema with high pressure, you need to drain the anterior chamber and very likely do vitrectomy. A trauma hyphema with a high pressure is something that requires surgical drainage. Lastly, sometimes general anesthesia or laryngeal mask is not available. How safe is the use of sub-Tenon’s and facial block in repairing open globes? The facial block might be okay, but I think the sub-Tenon’s is quite risky. Two problems. If you don’t know where the rupture is, you could enter the globe in a soft eye. And the second thing is the anesthesia going to enter the vitreous cavity, which could be toxic to the retina. If the globe is soft, what would you use to fill the globe? I would use balanced salt solution, to pump it up, so to speak. I would not use Viscoat. I think one of the other questions earlier on was filling the eye with Viscoat, and the problem there is the pressure may well be uncontrollable. So you could use, in addition, air, or expanding C3F8. But I wouldn’t use Viscoat. Because of the attendant issues. And I would also not use silicone oil, because you’re not in control of the situation yet. Is it advisable to repair iris or lens washout at the time of initial globe repair? That is a judgment call you’ll have to make. I would say most of the time no. You close the eye and then understand what your repair has to be, because you may be able to put a secondary lens in, for example. It may take a day to find the correct lens. Repairing the iris is very hard to do in a soft eye. Or a just repaired eye. The risk of bleeding is quite high. If you touch the iris, even, it will bleed. So the point of waiting a day or two or three is to get control of the bleeding situation and enhance your visualization. The only thing I might add is: When I went through the questions, somebody asked about any special pediatric considerations. One of those is that the organism involved in pediatric endophthalmitis with ruptured globe in many cases is E coli faecalis, which is something that is very hard to treat with antibiotics. Vancomycin has been used, but there’s a high resistance rate. So the type of antibiotics used in your environment is important to know. Also management of the lens and management of potential amblyopia are critical.